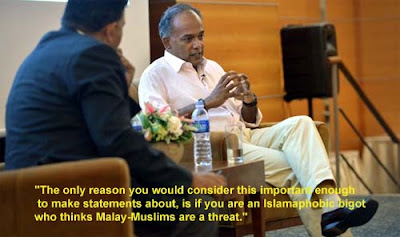 Law and Foreign Affairs Minister K Shanmugam claims that his key points made at a Singapore Press Club forum on Thursday (Aug 27) were:
1) The Chinese leadership in various local areas in Malaysia want to maintain control over the Chinese population;
2) At the same time, many mainstream schools in Malaysia are becoming more Malay and Islamic which discourages the Chinese from going into those schools.;
3) So you end up with having more Malays going to mainstream schools, and more Chinese going to Chinese schools.

That's the kind of racist commentary that upset sensitive types and got Singapore tufted out of Malaysia.

When Sangeetha Thanapal ("independent scholar and social media activist engaged in anti-racism work in Singapore") took offence at the interference of a neighbouring country's domestic politics, the Indian law minister's initial approach was civil and statesman-like, the type of classy response that makes you wonder why one racist said Singapore is not ready for an Indian prime minister:


"Dear Madam, I hold no personal animosity towards you. Will be happy to speak with you."


The meeting of the minds - Sangeetha thanked him for offering to speak to her and provided her telephone  number so he can call her on Saturday for an appointment - will never take place. We are disregarding spousal objection to the out-of-office rendezvous here. Higher powers must have intervened, and now we have an oddity of a law minister intending to file a police report over the Facebook post which has been deleted:


"Who are you, an Indian, to be deciding what is that acceptable enough way to be Malay-Muslim?"


Whoa! What happened? Can the spirit of a dead horrible person reach out from Hades to possess the living (鬼上生)? Somebody or someone has to be putting words into the peace-loving animal-lover type politician:


“(The late Mr Lee Kuan Yew) foresaw these things, which is why he kept talking about such issues. And, each time he talked about those issues, every generation which was not his generation tended to be dismissive. ‘Here goes old man again trying to scare us.’”


The scary part is that this could be a cockamany election tactic to move the populace to rally around the flag when missiles (figurative! figurative!) from Malaysia start flying across the Causeway. If that's the game plan, someone will be sorely disappointed. The more likely outcome is that risk adverse fence sitters will finally realize the rabble rousers are from within, and that the time for alternate leadership is long overdue.